Making Sense of the Numbers

The Initiative’s participant cities currently comprise a data sample size that represents over a quarter of Minnesota’s population (29%) and includes municipalities of varying types from the state’s four largest cities to inner and outer-ring suburbs of various sizes. Through the process of compiling four years of data for 22 Minnesota cities, certain trends have emerged. Key findings from each indicator category are visualized and explained below.

ENERGY USE BY SECTOR
RESIDENTIAL VS. COMMERCIAL/INDUSTRIAL BREAKDOWN SHOWN FOR 2011 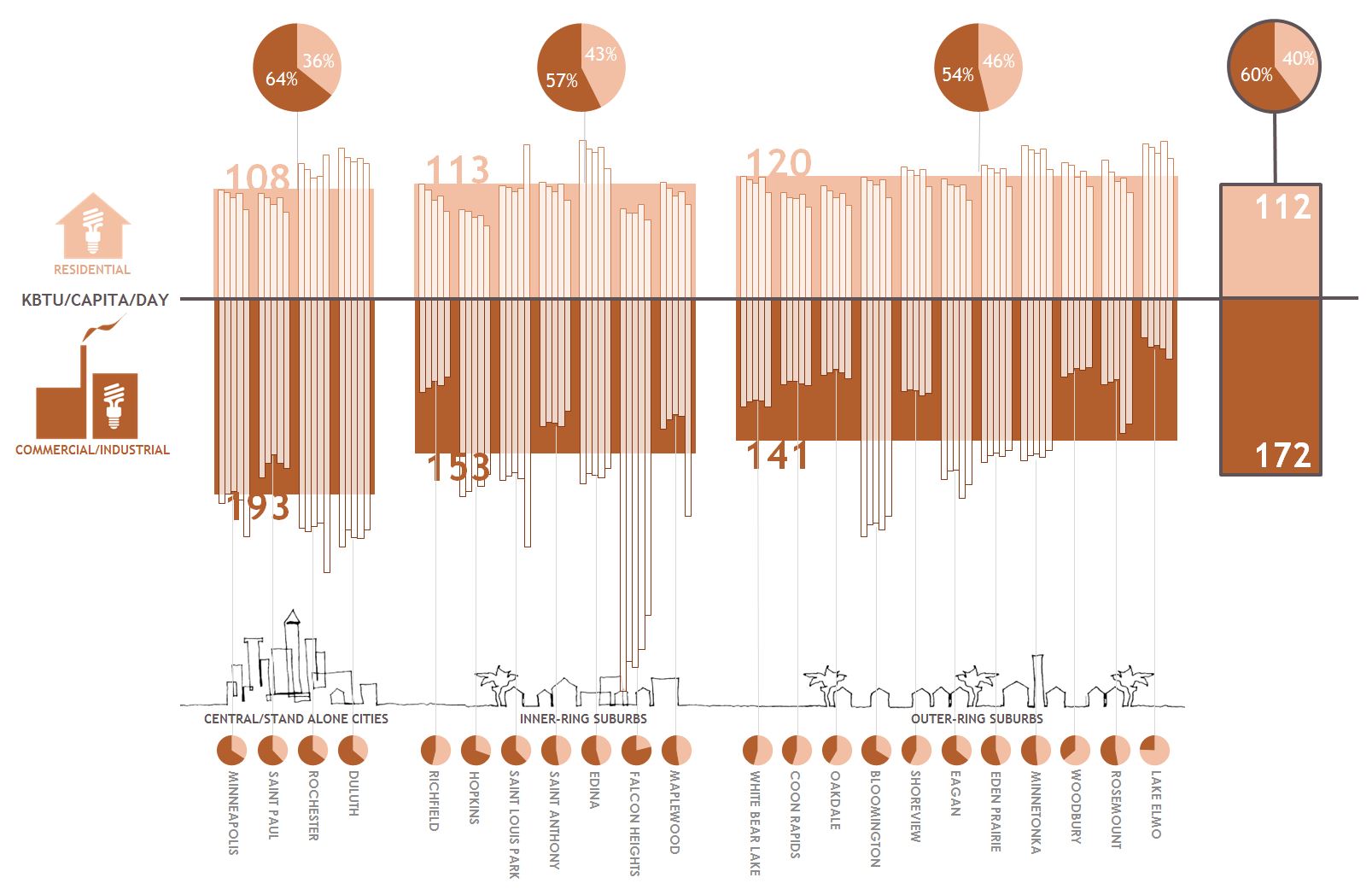 WATER USE BY SECTOR
RESIDENTIAL VS. COMMERCIAL/INDUSTRIAL BREAKDOWN SHOWN FOR 2011 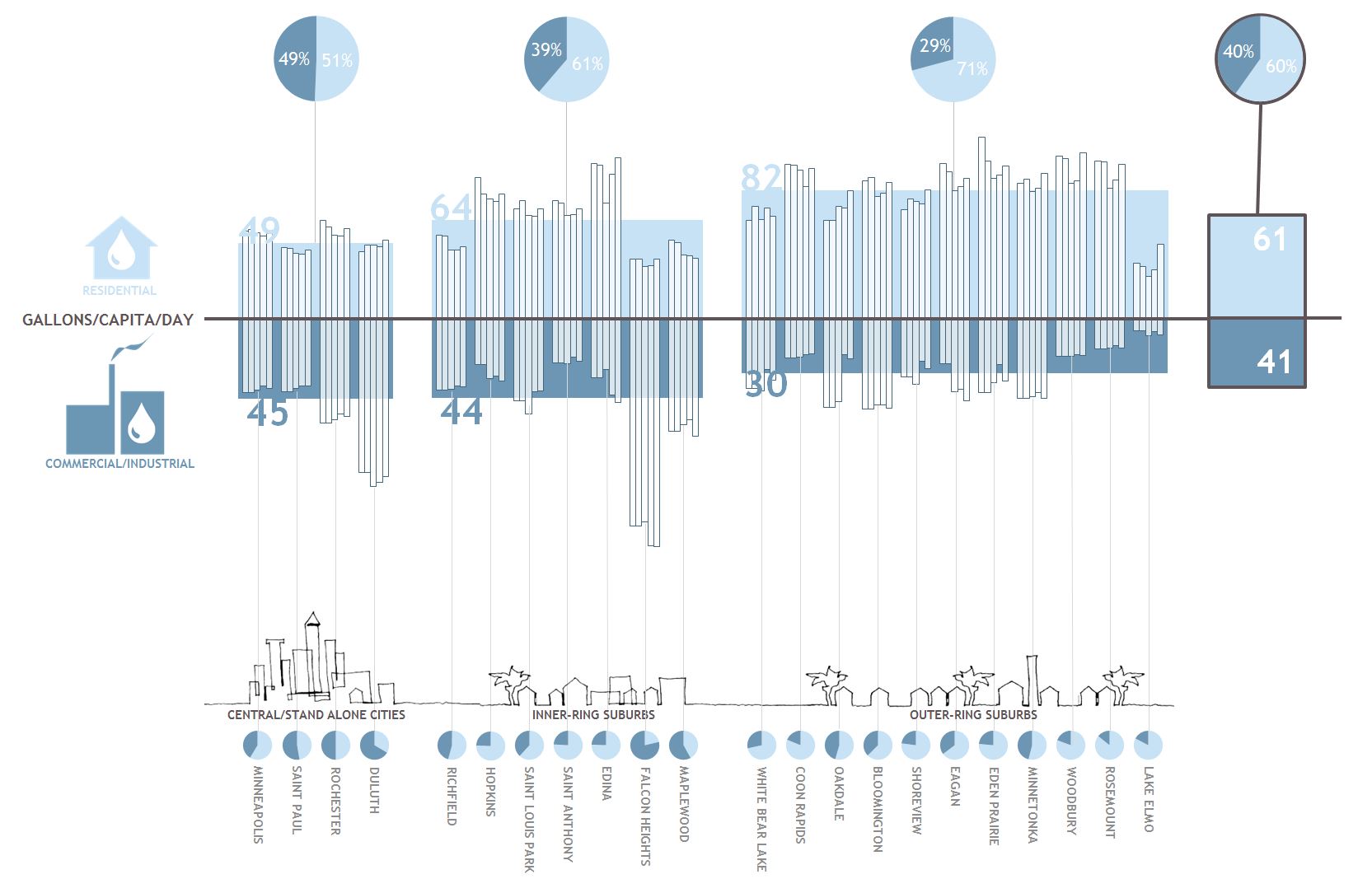 Because waste data is collected at a county-wide scale, this metric is not as city-specific as the other indicators. In order to estimate city waste numbers, county data was pro-rated by city population. This provides a general ballpark of city-wide waste data but is not specific enough to reflect the waste trends of an individual city. However, conclusions can be made at a county-wide scale, where over the seven counties involved in RII in 2011, 47% of the waste was recycled, 29% incinerated and 24% landfilled.

When looking at the breakdown of GHG emissions in 2011 for each category, energy dominates with 68% of emissions. Vehicle miles traveled is the second largest contributor at 25% of emissions. Airport share equaled 5% of total emissions, solid waste - 1.5% and wastewater treatment was only 0.5% of the total (energy used to pump and clean water is included within the energy sector in this case).

This analysis reveals the magnitude at which energy contributes to overall greenhous gas emissions for the 22 cities studied; explaining why the trend lines for GHG and energy over the four year study period closely align. In addition, it reveals that the four ‘primary’ indicators which data was collected for in this study (energy, water, travel and waste) cover the majority -91.5%- of all GHG emissions.

Currently, 20 of the 22 RII cities have joined the GreenStep Cities program, providing an opportunity to compare the best practices each city has adopted with the data collected through the Regional Indicators Initiative. By comparing the strategies adopted with data collected through the RII, the hope is that the impact of each strategy can be measured. In addition, strategies that cities have adopted that are not a part of the GreenStep Cities program can be identified for continued improvement and refinement. In the future, this collaboration can guide cities to focus on selecting the best practices with the greatest impact.

Out of the 28 best practice categories, 19 are directly measurable within the Regional Indicators Initiative’s four current indicators. Categories that are not currently directly covered include: Land Use, Urban Forests, Efficient Storm-water Management, Surface Water Quality, Local Air Quality and Local Food. A possible addition could be to expand the RII indicators to cover the remaining nine best practice categories that are not currently correlated.

The Regional Indicators Initiative’s purpose, findings, and implications have been presented at several conferences and events throughout the United States. The findings of this Initiative have also been shared at public presentations in each participating city.

There are many opportunities to contribute to the Regional Indicators Initiative’s mission and goals whether you are a city leader, business owner/organization leader or individual: